In Memoriam of Paul Pines

We are saddened to announce the passing of Paul Pines, a beloved friend of the Adirondack Center for Writing and longtime champion of the larger arts community. Paul was a volunteer and educator for ACW for many years, and we are so grateful to have had the opportunity to work with him. He will be missed by many organizations and people across the globe. We invite you to keep Paul in your thoughts as we remember such an impressive and kind person. 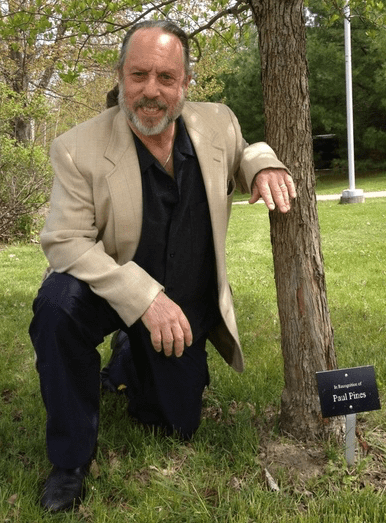 Paul Pines grew up in Brooklyn near Ebbet’s Field and spent the early 1960s on the Lower East Side of New York. He shipped out as a Merchant Seaman, spending August 1965 to February 1966 in Vietnam. In 1973, he opened the Tin Palace, a jazz club on the corner of 2nd Street and Bowery-which provided the setting for his novel, The Tin Angel (W. Morrow, 1983).

Pine’s travels in Mexico and Central America in the 1980s shaped his second novel, Redemption (Editions du Rocher, 1997), around the Guatemalan Mayan genocide. His memoir, My Brother’s Madness, (Curbstone Press, 2007; Adirondack Center for Writing Award, best memoir) explores the unfolding of intertwined lives and the nature of delusion.

“Coming of age in the ’50s and ’60s on the Lower East Side of New York, I found poets everywhere. One couldn’t walk down the street without running into them. The ghost of Black Mountain haunted Max’s Kansas City, where I sat at the bar between Fee Dawson and Donald Phelps. I listened to jazz with Paul Blackburn, who also introduced me to Octavio Paz when the Mexican poet and his wife gave a talk in Paul’s apartment above McSorley’s. Paul warned me against the siren song of translation—not to get caught in it as he had. But I read his The Journals as they appeared, and learned to view poetry that way, to read the landscape as an oracle.” — Paul Pines, The Conversant

Paul conducted workshops for the National Writers Voice program and lectured for the National Endowment for the Humanities. He had been a fellow at the MacDowell Colony, Ossabaw Foundation, and Virginia Center, as well as a recipient of an Artists’ Fellowship, N.Y.S. Foundation for the Arts, 1984 and a CAPS Fellow, Poetry, 1976.  He was a member of PEN, BMI, C.G., Jung Foundation, and The Author’s Guild. Paul Pines taught literature and creative writing at SUNY Adirondack until 2007, where he retired to practice as a Jungian oriented psychotherapist in private practice.

He was honored by the Friends of the Albany Public Library, November 2014 and was the recipient of the Adirondack Center for Writing Award for: Fishing on the Pole Star, Best Book of Poetry in 2014; New Orleans Variations & Paris Ouroboros, Best Book of Poetry in 2013; Reflections in a Smoking Mirror, Best Book of Poetry in 2012; My Brother’s Madness, Best Memoir 2007 and the Best Poetry Book of an Artists’ Fellowship, New York State Foundation for the Arts, 1984. His fellowships included CAPS Fellow, Poetry, 1976 and numerous fellowships to The MacDowell Colony, Ossabaw Foundation, Virginia Center.  He was a member of PEN, BMI, The Authors Guild, and the C.G. Jung Foundation. His daughter is Brooklyn actress, Charlotte Pines. Pines was most recently living with his wife, Carol, in Glens Falls, NY, where he hosted The Lake George Jazz Weekend.

5 thoughts on “In Memoriam of Paul Pines”