That’s Not Possible by Linda Freedland

Sometimes our children are so far ahead of us in the geeky world of technology it’s scary. For example, when my eight-year-old son came home from school and announced that one day kids would never have to carry all their books around all day. To emphasize his point, he dropped his much-too-heavy bookbag on the table. The table shook.

Sympathetic but curious, I asked him what he meant.

He looked at me, in all seriousness and yes, a bit of sympathy for my ignorance. “Mommm, haven’t you heard of electronic books?”

To be honest, in my years with the State, mired in politics and energy-related issues, the topic of electronic books had never reared its innovative head.

Ben went on to explain how thousands of books would somehow, through the miracle of airwaves and technology (and he wasn’t too clear about the specifics) would allow a mere mortal to carry around said thousands of books on a small “thing.” Again, he wasn’t sure hat that “thing” would be called but it was coming. That much he knew. Right now, the Declaration of Independence had already been transferred onto a floppy disk. Of course, that “thing” would eventually be called a “reader” and those electronic books would become “eBooks.”

But I was still stuck in a paper world. “Ben, that’s not possible. It’s not reasonable to think that thousands of books can somehow be electronically made to fit on something you can carry around.” I have to point out, I was not very technologically savvy back then. My ability to process taking a book and squeezing it into a “thing” you could carry around was out of my realm of imagination.

But my son certainly could. “Think about it, Mom, no need to ever go to the library again.”

I did think about it. A lot. It was not a pleasant thought. All those unemployed librarians. I had once been a school librarian and those were the first jobs that were cut when federal funds were eliminated. I lost my job. But this was 1995. Also, not a good year for me. I got laid off from my job with the State – and I wasn’t even a librarian. I also worried about bookstores, especially those small, independently owned ones.

Three years later, “eBooks” had been developed and Google was founded. Eight years later, Sony put out their eBook Reader. I bought one. At first, I felt guilty but by then, we were doing more traveling and the ability to carry around with me dozens of books on a device that was thinner than most paperbacks was a godsend. I was hooked. And apparently, so were millions of other readers. Readers were flying off the shelves and EBooks soon out sold paperback books. And, sadly, many of those small bookstores did close their doors.

I’m now on my third reader and my second Kindle. And, as I expected, my trips to the library dwindled down to a trickle. And with most libraries just beginning to reopen due to the pandemic, being able to have books within minutes, has been a safety valve for millions of readers. I still love to browse through bookstores. There is nothing quite so pleasant as the smell of a new book, or holding a book in your hands, physically turning the pages. Readers provide convenience and immediate gratification but none of the emotional or tactile sensations of a “real” book.

I still buy books on my Kindle, but I am now confident that the libraries will remain intact. They provide more than just books, but serve as a valuable community resource, now needed more than ever. And to be truthful, I feel a lot better (dare I say “virtuous”?) borrowing my books, rather than hitting the “Buy with One-Click” button. And, yes, I can even borrow eBooks from my library. A win-win for us both.

2 thoughts on “That’s Not Possible by Linda Freedland”

Tell a (true or untrue) tale of a haunting visit from a ghost. Perhaps it’s friendly and familiar, or maybe it’s a warning or fright 💀
Creative writing responses accepted for this prompt until 3pm on Friday, October 23. Send yours in!

Finding Your Place: Writing Creative Nonfiction with Annie Stoltie starts on November 9 and is a Pay What You Can class perfect for both novice and experienced writers looking to draw inspiration from their current environment. More info here. 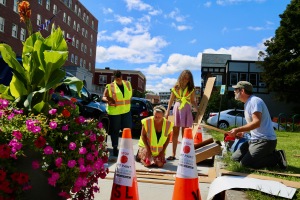 📍Ronald Berger has just published The Gorge, a thriller based on his experience as
a whitewater raft guide on the Hudson River during the 1990s. Paperback and Kindle e-book editions are available on Amazon.com.
📍Christopher Shaw has published a new book The Power Line, and can be ordered at his website.
📍Howard Kirschenbaum has just published a new book, Coming of Age in the Baby Boom: A Memoir of Personal Development, Social Action, Education Reform and Adirondack Preservation. Paperback and Kindle e-book editions are available on Amazon.com.
📍Brian Heinz‘s newest book, a thriller novel for ‘tweens and teens,’ Peabody Pond, has been published and released by 4RV Publishing.
📍Betsy Folwell has released an extended version of Short Carries as an audiobook for the first time. These essays are about wildlife and wilderness, regional history and small-town life, with keen observations and a touch of humor.
📍Tupper Lake author Jack Heinz has released a new book Six Spies in Saranac. Available for purchase at local bookstores and at his website.