Skip to content
May 15, 2020 Adirondack Center for Writing Featured Writing

One summer, an endless childhood summer, we stayed at a cottage on a lake in Michigan. The house came with a little outboard motorboat that coughed and sputtered when it started, and it gave off that unmistakable gasoline smell most of the time.

My mother didn’t drive the boat, but when my father was around, he and I would take it out. He came up from Cincinnati on the train a few times, and while we waited for him at the station, I would put coins on the tracks to be flattened by the train. I got quite a collection.

We often went fishing in the little boat. I caught a total of thirteen perch that summer, a disappointing number. I remember them floating on a string hanging off the side of the boat, but after that I don’t know what happened to them. I do know that we didn’t eat them.

Sometimes we took the boat across the lake to a country store to pick up provisions. Every time we went there I had a cherry ice cream soda. I had never heard of such a thing before – at home I always had chocolate.

Cherries grow in orchards in that part of Michigan, so when my mother and I went out in the car, we would stop along the road and buy a bag of them. As we drove, I would roll down the window and practice spitting the pits as far as I could, trying to hit mailboxes and trees and telephone poles.

That was the summer that Babe Ruth died. There were big black headlines about it, and I felt upset even though he had retired before I was born. Besides, I was a Cincinnati Reds fan.

Summer is coming in the Adirondacks, and soon I’ll be smelling the gasoline fumes from the motorboats starting up on the lake near my house. Pennies. Perch. Cherries. Babe Ruth. It all comes back to me every time.

Everything in the world feels so big and overwhelming right now. At least that’s how it feels for me. So I might suggest that we try to write into the opposite of that feeling. I might suggest that we write something small. Try a teeny confession. Try a teeny compliment. Write a tiny conversation. A tiny love letter. The littlest ode to the smallest object you love, something that can fit whole in your hand. So much is intangible right now, so consider something you can actually touch, or taste or take with you in your pocket. Conjure that teeny tiniest thing and live with the minutiae of it for a minute. ✨

Creative writing responses accepted for this prompt until Friday, June 5. Send yours in!

📍Linda Marshall has published a new book “Saving the Countryside: The Story of Beatrix Potter and Peter Rabbit” from Little Bee Books.
📍Candy J Cooper has a released a new book, “Poisoned Water” from Bloomsbury.
📍Marilyn McCabe has published a new chapbook, “Being Many Seeds”. Watch her videopoem here
📍Eudora Watson has published a new flash fiction piece, “On Going Into the World, Instructions for a Bookworm”
📍”Quitting Time” by Gregory Jeffers has been awarded 1st Place in the Writer’s Digest Short Short Story Competition 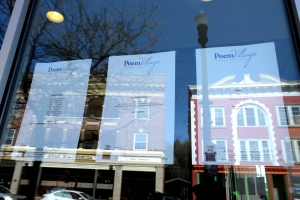